My Girlfriend and I’s time in Cambodia has been primarily spent on the beautiful island of Koh Rong volunteering at a resort. We had a holiday from our work and spent 6 days in Siem Reap in order to explore the temple complex of Angkor Wat, explore the lovely city of Siem Reap and have a wonderful break. On the second morning of our stay in Siem Reap, we booked a sunrise tour of Angkor Wat followed by the small tour of surrounding temples. After waking at 4:00 am in the morning and meeting our tuk-tuk driver in the foyer of our hotel, he rushed us off to get our tickets for the Angkor archaeological site from the ticket booths in the Angkor conservation area. Bleary-eyed I posed in front of the webcam and had my picture taken and printed on to my ticket, as a reminder of how awful I looked at that time in the morning.

We were among the very first people through the ticket booths with our newly acquired 3-day pass in our hand we went and found our tuk-tuk. Our driver then took us to Angkor Wat to start our day, it was by now around 4:30 am and the cold morning air rushing past me in the Tuk Tuk served to wake me up and get me ready for the day ahead. Arriving at the temple in the dark it was hard to gauge a sense of scale, but the walk across the temporary pontoon across the moat gave me a good idea of how wide the moat surrounding Angkor Wat is. Following other people walking ahead we crossed the pontoon and entered the Temples outer walls following a raised walkway. Whilst walking along this raised walkway we could just about discern the outline of Angkor Wats characteristic towers in the dim gloomy early morning light. After a moments deliberation, we choose to take a pathway to the left towards the café and shop stalls in the temples grounds but also where a small lake in front of us would show us what we hoped would be a gorgeous reflection of Angkor in the sunrise.

Angkor Wat is both the best known and also the best-preserved temple in Cambodia and also features on the national flag. Angkor Wat translates as meaning Temple City and is located south of the ancient Khmer capital called Angkor Thom which contains the Bayon temple. Angkor Wat was constructed during the first part of the 12th century by the King Suryavarman II who built it as his state temple. It is also widely believed to have served as his funerary temple after his death. Some evidence such as some of the unfinished bas-relief decoration has led to the assumption that work on the temple stopped abruptly after the king’s death.

Angkor Wat broke with Khmer tradition, up until Angkor Wat the temples of Angkor had been dedicated to Shiva and orientated East, Angkor Wat, however, was orientated West and dedicated to the Hindu God Vishnu. Another reason to believe that the King used this as his funerary temple is its orientation, where the end of the cycle of life is symbolised by the setting sun in the West. It is the largest Hindu Temple and indeed the largest religious monument in the world and exemplifies both the skills of the Khmer builders and this classical style of Khmer Architecture to which it lends its name, the Angkor-Wat Style.

Off to Explore the Temple

After obtaining my photo of the sunrise over Angkor Wat the light of the new dawn suddenly revealed the true size, scale and majesty of Angkor Wat. Walking along the raised processional way towards the main entrance to the raised central temple we came to a set of steps leading onto a cruciform causeway. This causeway leads to the outer gallery comprising columned half galleries open towards the outside of the temple with pavilions at each corner. The outer gallery measures approximately 187m x 215m, the most beautiful bas-reliefs can be found in its corridors. These depict scenes such as the churning of the ocean of Milk from Hindu Mythology and the battler of Lanka from the epic Ramayana among many others. The carvings are extremely intricate and beautiful and add to the sense of scale and sense of the amount of work that went into building such a magnificent temple. The detail and workmanship begin to get more impressive the further I ventured into Angkor Wat. Within the outer gallery from the entrance is a cruciform cloister leading to the second level gallery called the hall of a thousand gods. It was here in one of the outer cloisters I took a photo of a Buddhist Monk, the life and orange robes in stark contrast to the temple.

Angkor Wat towards the end of the 12th century was gradually changed to Buddhist place of worship rather than its original Hindu place of worship. There are hints of western visitors throughout the 16th, 17th 18th and 19th centuries who all marvelled at the splendour of the temple and also shows that the temple was never completely abandoned or lost. It is widely believed that the outer moat served as a good protector from the encroachment of the jungle into the temple which other temples such as Ta Prom suffered badly from. The famous French naturalist and explorer Henri Mouhot popularised Angkor Wat in his writings and travel diaries. Angkor Wat soon became a source of fascination for the French who colonised Cambodia and there were soon large exhibitions with recreations of Angkor Wat in Paris. In around 1908 the Ecole Francais D’Extreme-Orient established the conservation d’angkor which was the first modern era attempt to conserve the temple. They started to clear the jungle and flora that had encroached into the ruins and rebuild and strengthen what they could. Conservation efforts have continued and strengthened up until the present day with wooden steps and rope barriers recently being introduced to protect the floors, steps and bas-reliefs of the temple from the millions of tourist who visit every year.

The Second gallery is connected to the inner galleries by again another cruciform terrace which also links to 2 libraries that flank the inner gallery. The enclosure is around 100m by 115m and the corridor is lined with thousands of intricately carved columns. Throughout the galleries are the remains of pedestals where statues that have since been robbed would have once stood. On each of its 4 corners stands a tower and they have all partially collapsed. Within this, there is a 60m square platform called the Bakan with a central tower above the shrine rising about 43m high. It is surrounded by 4 other lotus bud-shaped towers like the central tower, each of which linked by a gallery and gopura to the centre tower.

The Bakan is the main focal point of the entire temple and the quintet of towers in the centre of the temple are built to resemble the 5 peaks of the sacred Mount Meru, the home of the gods in Hindu cosmology. The very steep staircases surrounding the Bakan represent the difficulty in ascending to heaven. Each layer of the temple would have had different levels of access, as each level got higher it got more exclusive. The laity would only have been allowed access to the very lowest parts of the temple.

Monkey in the window

On leaving the temple and walking back towards the Pontoon bridge to take us back to our Tuk-Tuk and onwards for the rest of our temple tour I noticed a cute pair of monkeys sitting on the roof. Just after there was a lovely cute pair of monkeys eating an apple with a smaller monkey too sitting in one of the deserted windows of Angkor Wat. It made one of my favourite shots of the day.

My visit to Angkor Wat deeply impressed me, the bas-reliefs around the temple were simply amazing and the sheer attention to detail and amount of carvings on seemingly every face of every wall showed me what a monumental building it was.

In fact, it has been estimated that the amount of stone that had to be quarried to build the entire city of Angkor would have been more than for all the Egyptian pyramids combined. The more impressive feat is that the quarries for the stone to build Angkor Wat are located near Mount Kulen 40 miles away. It is thought that the stone was floated down canals to the building site. The one drawback to me visiting Angkor Wat was the number of tourists, of course, we were ourselves but the sheer number of people there spoilt the character of the temple in my opinion. Other temples that we visited including Ta Prohm to me seemed to have a lot more character and fewer visitors. I would definitely recommend the trip to Angkor Wat, even with its steep ticket price as this enables the conservation and restoration of the entire Angkor complex. 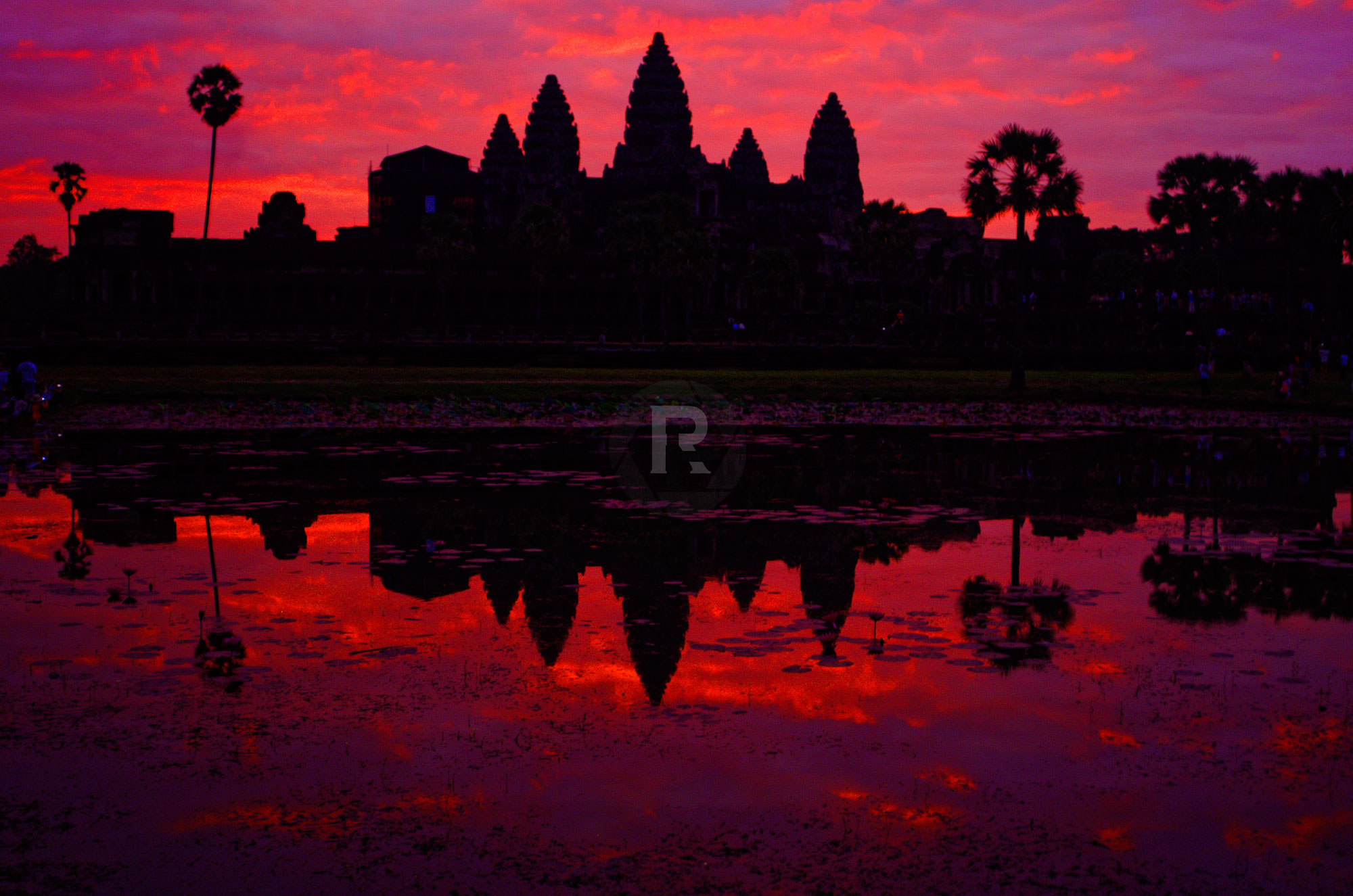 Article Name
My Visit to Angkor Wat and a brief history
Description
My visit to the amazing temple of Angkor Wat in Cambodia. After capturing a magnificent sunrise over the temple reflected in the pool just beneath us we went on to explore the largest religious monument in the world and also lear a little of its history which is here for you to enjoy.
Author
Robert Pink
Publisher Name
Rob Pinks Blog
Publisher Logo