Before we began work properly in the Italian Dolomites we underwent a training and orientation fortnight, based at Haus Valentin one of the chalets the company we worked for was renting for the summer season. Haus Valentin is located in Badia about 14 km from Corvara and the chalet we would be working in for the rest of the season. Being one of the 2 chalet host couples that Collett’s had hired for the summer season, the 4 of us had training separate to the 26 odd walk organisers who made up the largest proportion of the Dolomites team.

Our training was made up of menu planning and discussions, budgeting, trips to the local wholesaler, standards required for chalet cleaning and a large variety of domestic chores that we would be responsible for throughout the season. Luckily each of the chalet host couples was given a day off from our separate training to join one of the walk organiser training walks which allowed me my first experience of hiking in the mountains. We were allowed to choose which walk we would like to join, and after looking at the options we chose the medium difficulty walk named the pinnacles.

We left the next morning at 8:30 on the day of the Giro D’Italia, by van driving through Corvara and parking opposite the hotel Bec de Roces. We loaded our packs and set off for a very memorable walk. We followed the road for about half a km, the turned off right up to a steep dusty service track. This was my first experience of the steep long ascents that were to be such a big part of my life in the Dolomites!! It seemed to go on forever and a day and the entire way up all I could feel were my calves burning. This part of the walk gave me reap pause for thought, wondering if I was at all cut out for life in the mountains.

After about 1 km and half an hour of ascent climbing approximately 250 meters, we came out at the top of the Bec De Roces chairlift that wasn’t yet operational as the season hadn’t yet begun. From the Bec de Roces chairlift there is a narrow path to the right signposted to Arraba, which lies far below on the left from here. Following this path leads through the pinnacles that the walk is named after. The path itself is a definitely not the easiest on the legs with lots of tree roots, very undulating and lots of big steps. Throughout this section of the walk are huge, up to 30m high rock spires either side of the path which winds through and around them. Every so often one could see belay anchors and bolts for quickdraws. I hadn’t yet discovered the joy of sports climbing but after I did, I soon came back to experience the climbing around here which was amazing.

After the steep ascent with very few good views along the way walking through the pinnacles very suddenly made all the hard work getting up there very worthwhile. On the route through the pinnacles, there is a myriad of small climbers paths which are worth very carefully exploring as they lead to amazing views that you wouldn’t see otherwise. Other small things of interest along the path are the remnants of what were artillery spotting emplacements during the first world war. Following the path a bit further and still enjoying the views as you come out of the pinnacles suddenly Marmolada is very prominently to your left with the lofty heights of Boe dead ahead of it very quickly makes you feel like a very small part of nature.

The path then splits, left through path 637 to Arraba and right to Boe and Lech Boe following path number 636. We turned right as our next waypoint was to be a lunch spot at Lech Boe. The path follows along the base of a tall cliff to the left of you, which I later discovered has several multipath climbing routes that are on my to-do list should I return to the Dolomites again. Carrying along the path I saw my first (name of the deer like things in the mountains) running down a really steep scree slope! The path becomes really interesting along here, opening up with a very steep scree slope to your right the turns a corner to the right heading upwards and it felt extremely exposed that first time I walked the path, with a drop of around 30 feet, 10m or so to the right onto the steep scree slope. Funnily my fear of heights really kicked in that first time I walked this path, but I was to walk it many times again later in the season and think nothing of it at all. I guess one does become used to exposure very quickly after walking in the mountains for a short while.

After this section, the path undulates somewhat towards the main piste of Boe. It is extremely well marked with way markers, but at the very start of the season, there was still around a foot of snow in small patches shaded from the sun by rocks. Getting to the main ski piste there was still a lot of ice and snow and we walked very carefully across it and down to Lech Boe. Following the path into the bowl like depression to the side of the ski slope of Boe was quite a strange experience the first time. With high cliffs to your right and your front as you approach the lake it is initially hidden from view and suddenly revealed itself as a relatively serene oasis halfway up a mountain! That first day at Lech Boe was extremely cold, the lake was still frozen with snow still around the edges. Even during the hottest day of the summer, Lech Boe seemed to attract a very cold wind and, being quite sheltered from the sun in the afternoon was quite a cold place to hang out, but the swimming was pretty good when you got used to the cold! After stopping for a quick lunch it was time to make our descent.

We followed the path down from Boe down the main ski piste, it was extremely steep with a nice zig-zag path running along and down it. There was still a little snow hanging around which made the path somewhat treacherous in places, but we carried on descending until we came to rifugio Crepe De Monte. It was just around here that my Karrimor walking boots that I had for 10 years and hiked countless miles in started causing me problems. The sole on my left boot suddenly started to flap around and come off, though still attached just by the heel. A friend luckily was carrying some duct tape and we manage to secure it enough to be able to finish the descent. From rifugio Crepe De Monte the path descended through the woods still following the ski piste. It was a long arduous descent with no really stunning views to write home about as there wasn’t anything to see once you get into the tree line. We came out on the road at the bottom portion of the Pordoi pass, from here there were some lovely views of Corvara, we then followed the path along the bottom of the golf course back into Corvara. Its only about a 15-minute walk from the path to the centre of town and we made it just in time to watch the cyclists in the Giro d’Italia come flying through followed by tv cameras and helicopters. As a first time impression of Corvara, it was gorgeous, such a lovely place and made me look forward to spending the rest of my season there.

I was to return through the pinnacles many times through the season. There are some really great sport climbing routes with varying grades, being quite high up on the shoulder of Boe you have some remarkable views from the top of some climbs. One great climb, in particular, I remember leading was a 30m 5c route from the top of which the views were simply stunning. I also returned and completed the same walk backwards several times with a large extension over the other side of the valley and onto the Pralongia plateau which I shall write about at a later time. The Pinnacles being my first taste of walking in the mountains gave me a real thirst for much more, being a place I returned to many times it still has an amazing sense of magic to it. I think this way round is the best way to walk it for the first time as it is such a surprise when you are suddenly amongst the spires, but walking the route in reverse gives you some absolutely stunning views also. 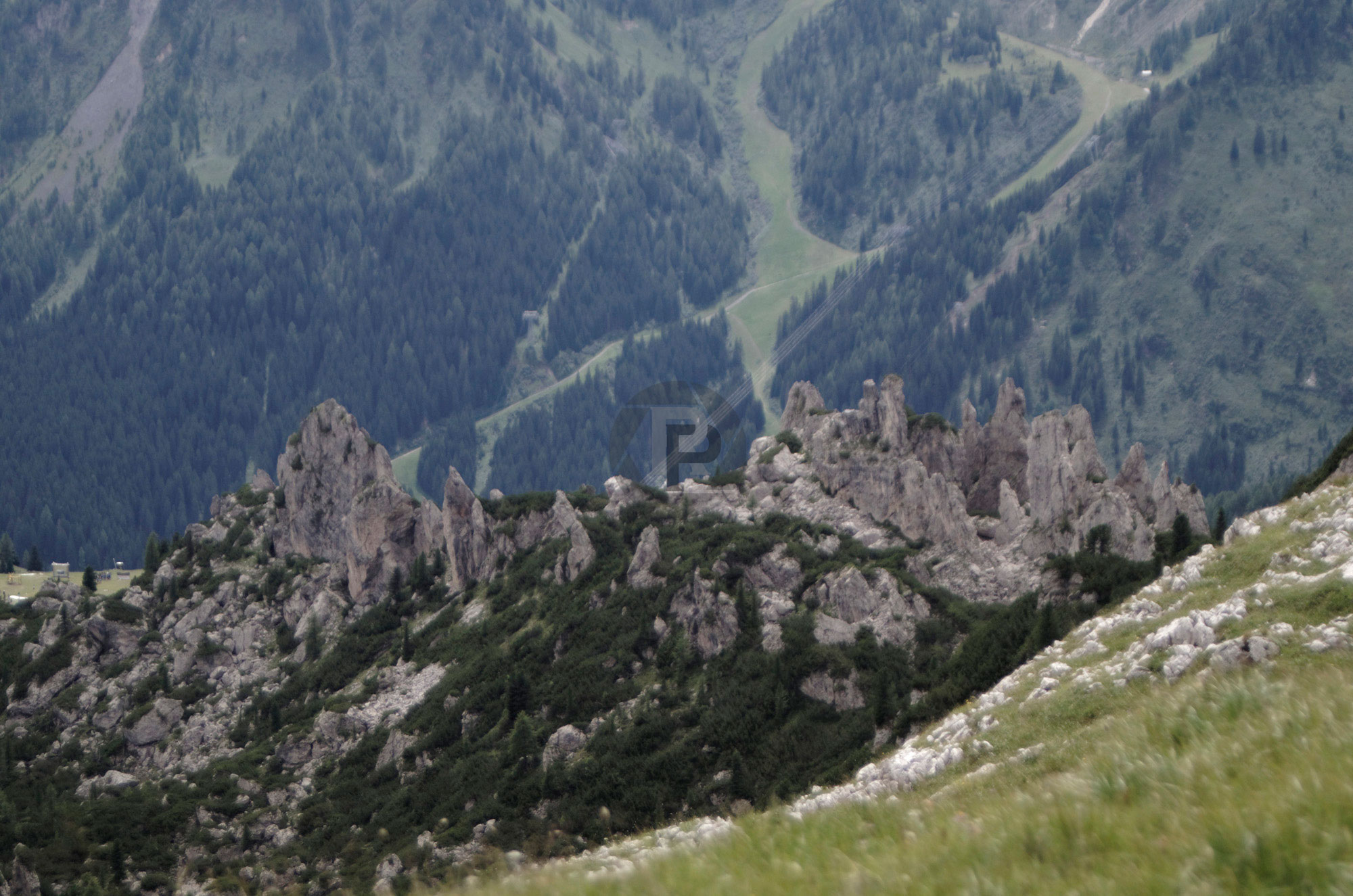