Leaving the Bayon and Approaching Baphuon

During our time in Cambodia, my girlfriend and I took a holiday to the amazing Siem Reap, to explore the magical temples around Angkor Wat. The temples around Angkor Wat and the history of the Khmer empire was for me part of the draw of coming to Cambodia, after having seen many documentaries explaining and exploring the Angkor Wat complex many years previously. Our second day in Siem Reap we spent on the small tour around the temples, after being taken to Angkor Wat for sunrise by our amazing Tuk-Tuk driver, he then drove us around to the Bayon and brought out a map. He explained to us that after we had explored the Bayon, we then had a choice, we could walk straight over to the Terrace of the Leper King & the Elephant terrace, or we could take a slight detour and explore the Baphuon first. We decided that we would take the second option and trudged on over to the Baphuon temple.

From the Bayon, it is only about a 200-meter walk, to the Gopura or entrance gates of the Baphuon, which face East. They are rather reminiscent of the main entrance at Angkor Wat, but with much fewer tourists around! Past the Main entrance is a raised sandstone walkway, which is supported by 3 rows of columns which carries you onwards toward the Baphuon temple. Midway along the walkway is a small pavilion which is extensively carved (as is the rest of the temple!) with scenes of animals, hunting & warriors. As you begin to near the temple along the walkway its scale suddenly becomes more apparent. It looks big from afar, but up close it is much taller than it seemed.

The Baphuon was built in the mid 11th century by King Udayadityavarman II, it was built as his state temple. It was built in the ancient capital city of the Khmer Empire, Angkor Thom, and as with most temples dedicated to Shive and Hinduism, it represents Mount Meru symbolically with a step pyramid design. With an outer enclosure wall measuring approximately 425 x 125 metres and a height without its central tower of 34 metres it is a very impressive massive structure. The central tower which would have held the most important Linga is thought to have been made of wood, of which nothing sadly has survived. However, it is thought that the wooden tower on top of the pyramid would have made the entire structure around 50 metres tall which would have made it an exceptionally imposing building in its heyday.

At the Base of the Temple

At the end of the walkway, there is an impressive Gopura, entrance gate, which forms the third enclosure surrounding the temple, with entrance gates on each side. Originally this enclosure would have had galleries which would have surrounded the temple, however, it is thought that the stone from these galleries was used to create the massive reclining Buddha when the temple’s use was changed to Buddhist worship in the late 15th century. Inside this enclosure are the remains of 2 libraries which would have had vestibules on each side. Also inside this enclosure are a set of very steep steps leading up the next level and second enclosure. The Baphuon is pretty unique in that each of the 5 levels that make it up, are each of approximately the same size, rather than getting successively smaller with each level.

The steps leading up to the 2nd level are extremely steep and I have to say I felt it in both my calves and thighs. At the top of the steps, we were met with another Gopura, entrance gate which is decorated with gorgeous and elaborate carvings with depictions from Hindu mythology amongst many others. The second level is also surrounded by galleries which form the second enclosure. After climbing more steps you gain the third level again surrounded by galleries from the third enclosure. There is a decoration on most exposed surfaces of stone everywhere and the temple has been meticulously constructed. Walking around the galleries you again approach more steps which again lead up to the next level.

In the late 15th century the temple was converted to Buddhism and a large reclining Buddha measuring 70 metres long by 9 metres high was created along the wall of the western sides second level. By the time of the 20th century, large portions of the temple had collapsed and a major renovation project was established. It was completely dismantled, the core of the structure reinforced and then rebuilt. During the process after something like 300,000 blocks had been carefully dismantled and labelled the project came to a halt due to civil war in 1970. The project was not resumed until 1996, by which time the plans for the reassembly of the structure had been lost and archaeologists faced what they called the largest 3d puzzle in the world and took them 16 years to reassemble.

The Top of the Temple

After gaining the penultimate level of the temple we were faced with a final mound which was fenced off with no access, unfortunately. We assumed this was due to recent collapses, it would have been surrounded by a central gallery with wings, with the central Prasat containing the Shiva Linga originally. There are fantastic views from the top where we were, we could see the layout of nearly the whole temple. We descended on the opposite side and left through the Western Gopura, looking back from the Second level one can just about make our the famous huge reclining Buddha built into the wall.

The Outer Enclosure Wall and Phimeanakas

After descending back down we proceeded to walk out of the Baphuon grounds, discovering the amazing outer enclosure wall with serval doorways and trees growing both out of and around the walls. It was stunning and made for some great photos. We continued following the path back towards the Terrace of the Leper King and the Elephant Terrace, on the way we passed another temple the Phimeanakas, partially hidden in the jungle and impressively towering above us. I fancifully imagined that the way the temple appeared to us must have been like it was for those first explorers who rediscovered them many years ago. Unfortunately, the Phimeanakas was completely closed and there was no access, so after taking a couple of nice photo’s we carried along the path towards the Terrace of the Leper King. 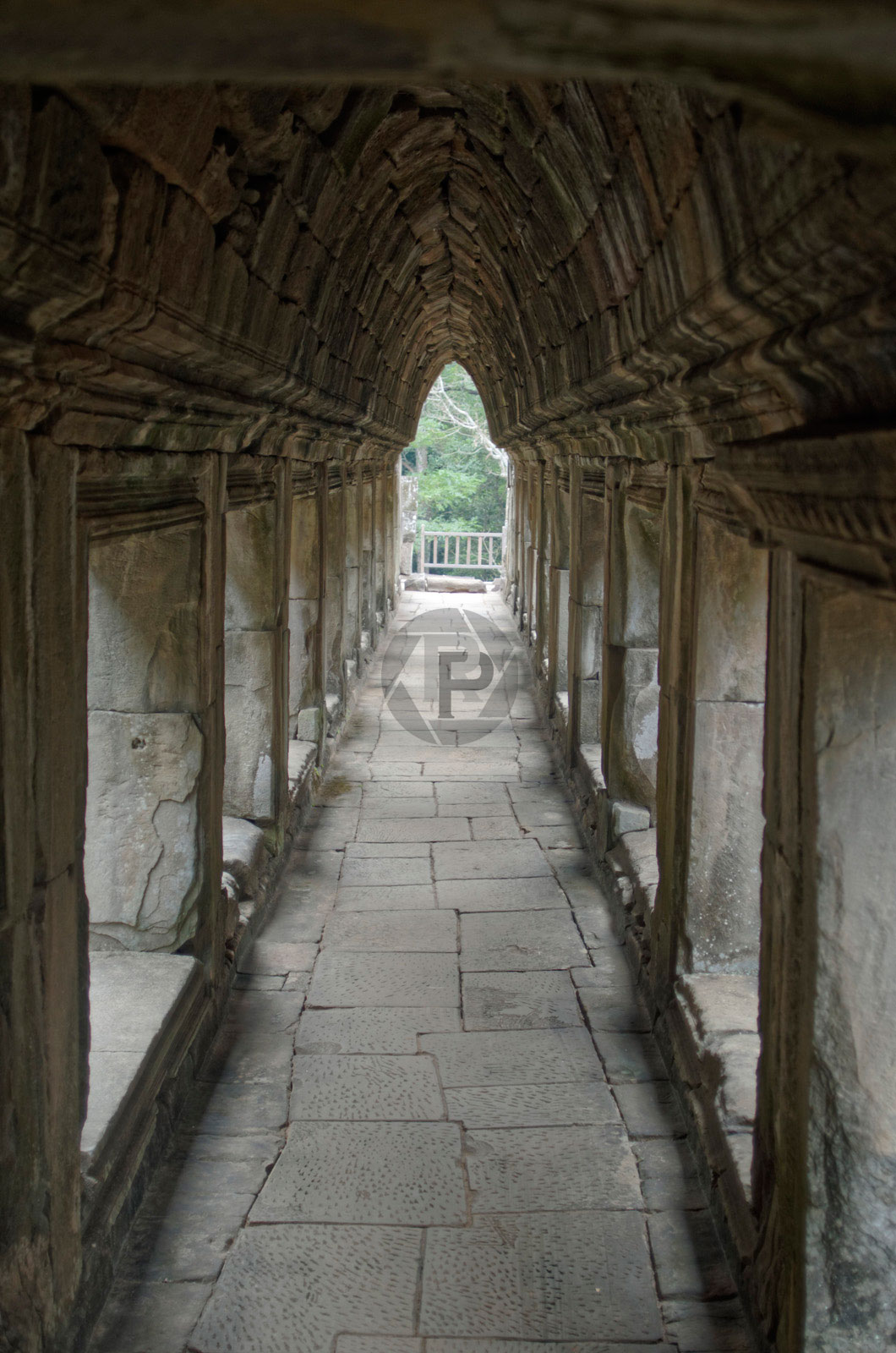 Article Name
The Baphuon & a Brief History
Description
My trip to the Baphuon Temple, during the small temple tour on our holiday to Siem Reap. Including a description of my visit with photographs I took and a small history of Baphuon which includes a huge reclining Buddha, exquisite carvings and gorgeous galleries.
Author
Robert Pink
Publisher Name
Rob Pinks Blog
Publisher Logo