During my time here in Cambodia, before my visit to Siem Reap and the amazing temples around Angkor Wat, there was one image I had seen on countless paintings and pieces of art, one that I was extremely keen to see for myself in the flesh, that of the temple of faces, the Bayon temple. We arranged our first temple tour through our hotel and it was pretty reasonably priced, we decided to do the small tour on the first day which included Angkor Wat at sunrise, then on to the south Gate of Angkor Thom, then the Bayon temple. I couldn’t wait. After the Bayon, we continued on to the Baphuon, the Royal terraces before heading out and around to Ta Prohm and Banteay Kdei.

Getting to Bayon temple

As our Tuk Tuk left Angkor Wat we very swiftly approached the Southgate of Angkor Thom, we passed through and again very quickly were approaching the Bayon Temple. On the approach, we could make out the high towers very quickly and as the Temple got closer the trees parted and the temple revealed itself to us more and clearer. Out Tuk-Tuk driver followed the road around to the other side of the temple while I hurriedly snapped a couple of photos. Our driver stopped and let us out, telling us he would be waiting in the car park further along by the Royal Terraces, describing a route through the Baphuon to us if we wished to see that temple too. As soon as our driver was happy we understood where we were going he set off along the road in one direction and we set off on foot towards the temple.

A Little about the Bayon’s History

The Bayon was built towards the end of the 12th century as the state temple of King Jayavarman VII. It is situated at the exact heart of Angkor Thom, which translates as Great City, Angkor Thom being the capital of the great Khmer Empire. Unlike a lot of other temples of the time the Bayon doesn’t have a moat or walls surrounding it, instead, it uses the moat and the walls that surround the city. The wall surrounding Angkor Thom has an entrance gate in each cardinal direction, North, East, West, South, each has a road that leads directly to the Bayon. The temple was originally called Jayagiri which translates as Victory Mountain, it was renamed by the French after their discovery of it the Banyan temple. Local Khmer workers pronounced it the Bayon instead of Banyan and the name has since stuck! It was originally constructed as a Buddhist temple although it also encompassed other deities and beliefs from throughout the Khmer empire.

The Bayon is a lot smaller than Angkor Wat to the South, although it does comprise 3 enclosures. There are 2 outer galleried enclosures and one upper terrace which comprises the first enclosure. It, however, seems very squashed almost, the very polar opposite to Angkor Wat with its vast open spaces. Our short approach from the road to the temple took us past a common feature of every Temple we visited, long rows of ordered stones, seemingly waiting for restoration like some vast jigsaw puzzle nowhere near completion.

We entered the outermost gallery which is approximately 160m by 140m, and I was amazed by the intricately detailed carvings that adorned the walls. It is estimated that the Bayon contains 1.2km of Bas-reliefs, which would have been an absolutely massive undertaken given the level of detail in each carving. In the outer gallery, the carving depicts everyday life in Cambodia around the time of construction along with battle scenes and even a scene of a naval battle on Tonle Sap lake which features everyday life from around the edge of the lake. There are 8 towers around the outer Gallery, one in each corner and one at the midpoint of each side of the temple.

As we proceeded into the second gallery, it is a little smaller at 80m by 70m, there is very little space between them only a change in elevation marks the boundary, the theme of the bas-reliefs changes, now seemingly depicting mythological scenes instead. There is the same degree of art and sophistication within these carving it is just the subject matter that changes, although some scenes seem unfinished. Again this gallery features a tower on each corner and also a tower at the midpoint of each side. Each tower acts as an entry point to the gallery. As we walked on through the winding and misleading passageways we entered the inner enclosure above this gallery and which was to be the absolute highlight of the temple.

The Design of Bayon Temple

It is thought the design of the Bayon was originally designed to be a single level structure much like its contemporary fellow temples of Banteay Kdei and Ta Prohm, the upper inner level was a design change later on during construction which explains the cramped feeling of the rest of the structure. Once you enter the upper level the temple suddenly opens up and wherever you walk you are followed by the gaze of a multitude of Lokesvara. This level is dominated by a central mass or tower that reaches high above you with the dominating faces of Lokesvara. All around you on this level at varying heights and aspects are also Faces of Lokesvara, which provides you with endless fascination as everywhere you look and walk the aspect of the temple completely changes. There were originally 49 towers containing the faces of the Lokesvara, however only 37 are left remaining now, with approximately 200 faces of the Lokesvara decorating them, some of the faces being 2.5 metres tall.

The Upper Level Of Bayon Temple

The Lokesvara adorning the towers of the Bayon bear a lot of resemblance to contemporaneous statues of King Jayavarman VII, which has led some people to suspect that he saw himself as a god-king and the Lokesvara are indeed modelled after him. There has been lost of speculation with regards to the meaning of the numbers of faces in the temple with some scholars declaring there would have been 243 faces in total, one for each region of in the Khmer empire. However with the missing towers and in some cases only partial preservation of faces that are left it is impossible to know how many faces actually decorated the temple in its heyday. The Central mass or tower marks an escape from Khmer Tradition in that it is circular in construction rather than square, and it is undoubted that it is, “The golden tower that marks the centre of the kingdom” that the great ancient Chinese Diplomat Zhou Daguan wrote about after visiting Angkor Thom.

Unfortunately, our visit to the Bayon was slightly marred by the hordes of tourists, who didn’t seem to care at all about the historical nature or importance of the temple and were clambering over every facet taking selfies and posing by hanging out of windows. If we were to visit again I would come to the Bayon first thing in the morning for sunrise and beat the hordes of tourists who like us went to Angkor Wat for sunrise first (although I would also recommend that and do that again in a heartbeat). Despite the number of people crowding the temple, it is absolutely fascinating and stunning. It is also a little eerie on the upper level with the faces of Lokesvara following you at every turn and everywhere you look from a multitude of different angles. As we left the Bayon to continue our visit onwards towards the Baphuon, just as we approached the path there was a collection of gorgeous elephant statues, I don’t know what the meaning of them is but they are beautiful. The Bayon is very high on my list of recommendations for Siem Reap and if like me while you are in Cambodia and wonder about all the depictions of the face towers on canvasses, paintings and t-shirts, it really is a must see that won’t disappoint.

Read more about the Bayon Temple on Wikipedia 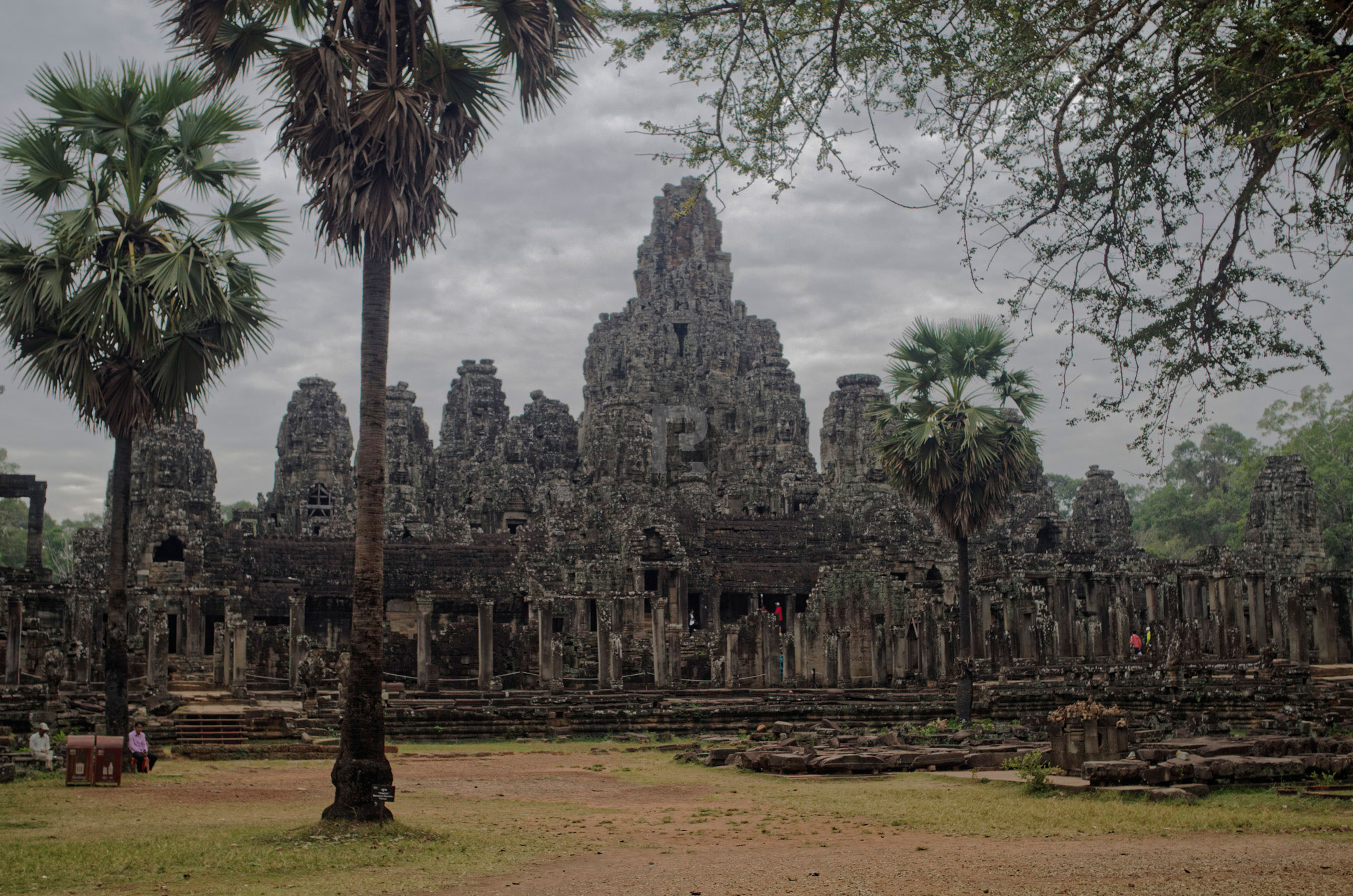 Article Name
My Visit to Bayon Temple & some History
Description
My trip to the amazing Bayon Temple, the temple of faces in Siem Reap Cambodia. A description of what I found and saw with a bit of the history of this amazing site. The Bayon is extremely high on my list of recommendations of things to do when visiting Siem Reap.
Author
Robert Pink
Publisher Name
Rob Pinks Blog
Publisher Logo