I spent my Summer of 2017 in the amazing Italian Dolomites with a group of amazing people. Each week when it came to having a day off from working hard, we all wanted to make the most of our time in the Dolomites and see as much as possible. After about a month Living in Corvara and barely exploring outside of Gardena one of my colleagues, Al suggested a hiking route to my girlfriend Gemma and I. The suggested route would take us out of Gardena and explore the Vallunga valley and end up in the town of Selva the other side of the Gardena pass. Al had walked the route on his own the previous day and had estimated the timing at around 9 hours getting into Selva with plenty of time for the last bus.

We packed our lunches, filled our Camelbaks, packed waterproofs, first aid kits and survival kits, then headed off for one of the most epic hikes I did in the Dolomites. The initial leg of our walk took us from Corvara to Colfosco. It was around the time of the Maritona and a wooden sculpture of a racing bike had been erected in Corvara, making a lovely photo as we walked past. The skies were deep blue and the air was clear and we knew it was going to be a great day ahead. We decided to use the Col Alt lift as we had a summer lift pass and it would skip a small unpleasant ascent through the woods below Sassongher.

From the garden in the chalet that we were both working and living in, Sassongher looked mightily impressive and very dominating over the landscape. Getting off the Col Alt lift it was even more impressive as the first time I had seen it up close, I was looking forward to scaling Sassongher later in the season. However today we carried on along path 4, skirting the base of Sassongher and running above the Edelweiss rifugio a short distance along the path. There were some short scree sections along the path but it was extremely stable and easy hiking without a steep ascent in this first section. At the junction for path 7 which takes you on up to the mighty heights of Sassongher, we carried on straight ahead along path 4 which had now started ascending quite rapidly.

Looking back from here there were some amazing views of Sassongher, Boe, Ciampac & Ciampei. Although the weather was fabulous it made the hiking rather warm and hard work. Path 4 continued to ascend through 1 false summit which opens up onto a dried lake bed and then carries on ascending even more steeply. The path gets a little looser than the first section but it is still in a really good state of repair. When eventually we had completed this part of the ascent we were treated to an amazing view of the Vallunga Valley ahead of us, below us and extending far into the distance. This view made the previous 2 hours of hard hiking completely worthwhile.

From here we took the junction onto path 2 towards Rifugio Puez. The path is very solid and well-marked, leading high up around the edge of the Vallunga valley. The views were absolutely gorgeous and I took numerous pictures as we hiked on. With Sasso Longo far in the distance and the spire of the Cir mountains on the left and mount Stevia on the right with the deep luscious green in the valley deep below it was truly magnificent. Following the path, we came to Rifugio Puez very quickly as the path along here is relatively flat. Despite having packed lunch for the day we decided to stop and have a warm meal here and enjoy a refreshing coke, it turned out later that this was a very good idea!

Leaving Rifugio Puez we followed path 2 further around enjoying the breathtaking scenery the entire way. Surprisingly we met very few fellow hikers along the route throughout the entire day, with one exception, one of our colleagues Sonny who worked in a different chalet was walking the same route in the opposite direction. We came to a fork in the path with path 16 dropping into the valley far below down a gorgeous rolling green slope. In what was perhaps a fateful decision, we decided to carry on along path 2, the weather was amazing we were feeling good and it was early in the day. From the fork, the path ascends quite rapidly again though it was easy on the legs.

The path then opens up into green fields and long rock slopes, evoking thoughts of the lunar pictures taken by Nasa. In places as it was so remote without another soul in sight, it was very otherworldly. Looking across the Vallunga valley one can see the Cir mountains with the top of the Sella behind them, in the distance now and to the left Sassongher was poking its head out, giving us a true sense of distance of how far we had walked. The path now decided to ascend again and we were getting quite close to Mount Stevia now. After this brief bit of steep ascent, it opens up and runs around the top of a scree slope as it approached Stevia, with gorgeous blue skies above us and dramatic views all around us it was one of my favourite sections of the walk.

We stopped halfway along with the irresistible desire to take a picture of the two of us in the amazing scenery, it took a few attempts but we eventually got something we were happy with. It was now passing between rocky spires either side of the path that everything started to get even more interesting. We were given glimpses into the valley to the right of us every so often that looked just as dramatic & we noticed that there were some fairly dark clouds gathering in the distance. The path now started to get a little more tricky with several cabled sections and a little more exposure and a junction whereby we could turn right and continue into the next valley along path 2 or continue forwards along path 17 and over Mount Stevia. Our decision was based on the fact that the path on the map looked like it went around Stevia, not over the top, and the clouds behind us were beginning to close in quite fast.

The map didn’t give us any indication of how steep the ascent was over Stevia or how steep it was until we got halfway up we still thought we would be swinging around the back of it before realising we had to keep going on up. Unfortunately at the halfway point and as an example of how fast the weather changes in the mountains a storm started right behind where we had seen some clouds forming only 20 minutes before. We started to panic and had to make a decision either retreat down the mountain and walk further around and towards the storm with no prospect of shelter or carry on and try to race the storm, summit Stevia and get down the other side. We gambled to race the storm and summit. It was a bit of a panic as the storm was closing on us quicker than we were closing on the summit and we really didn’t want to be the only living things that high in the middle of a storm.

We managed to reach the summit and Gemma decided we had to take a Selfie regardless of the storm by now pretty much on top of us and in the middle of rain pelting down around us. I’m glad she did, by this point we had both put away our cameras and she had her adventure camera out, it was a great photo! We pressed on as the rain got heavier and started the descent the other side. In yet another example of how quickly the weather changes as we started the descent which was very steep getting slippery with the rain and had lots of scree in front of us the rain suddenly stopped and we were again in bright sunshine! Literally just the other side of the mountain, the storm stayed the other side of us and we were safe and bathed in the sunshine again.

The Path to Selva

The path down Stevia is very steep, with a section of slippery wooden steps and a dodgy handrail. Looking into the distance you can see the path stretching away following the top of a bowl-like depression in the land. We headed for the steep grassy slopes beyond and the sound of cowbells. The views are just as dramatic along here and the path eventually after about an hour brings you out at Rifugio Stevia, from the signposts about 2:30 hours from Selva. We were now getting hungry and hadn’t really kept a check on the time, realising it was now 18:00 we decided to eat our packed lunch which we hadn’t eaten earlier and phone Al to see what times the buses leave Selva. He informed us quite dryly that we were out of luck and that last bus from Selva left at 17:00 and he very kindly offered to meet us with a van in Selva and drive us back to Corvara.

The path from Rifugio Stevia to Selva is amazing and by now my camera battery was dead so I couldn’t take any more pictures. The views are amazing and you stay high up along the path most of the way with an extremely steep descent into Selva through the tree line and its problems of roots underfoot and slippery dead leaves and twigs. It took us the 2:30 that the signpost had suggested and thankfully met Al and the van right at the foot of the path. We had walked for about 11 hours and covered 26 kilometres, among the most amazing landscapes. It was one of my favourite hikes in the Dolomites, it also taught me a lesson about how quickly the weather can change and to always prepare for the worst in the mountains. Thankfully everything worked out well and we managed to get back to Corvara and enjoy the usual day off pizza out in one of the local restaurants. 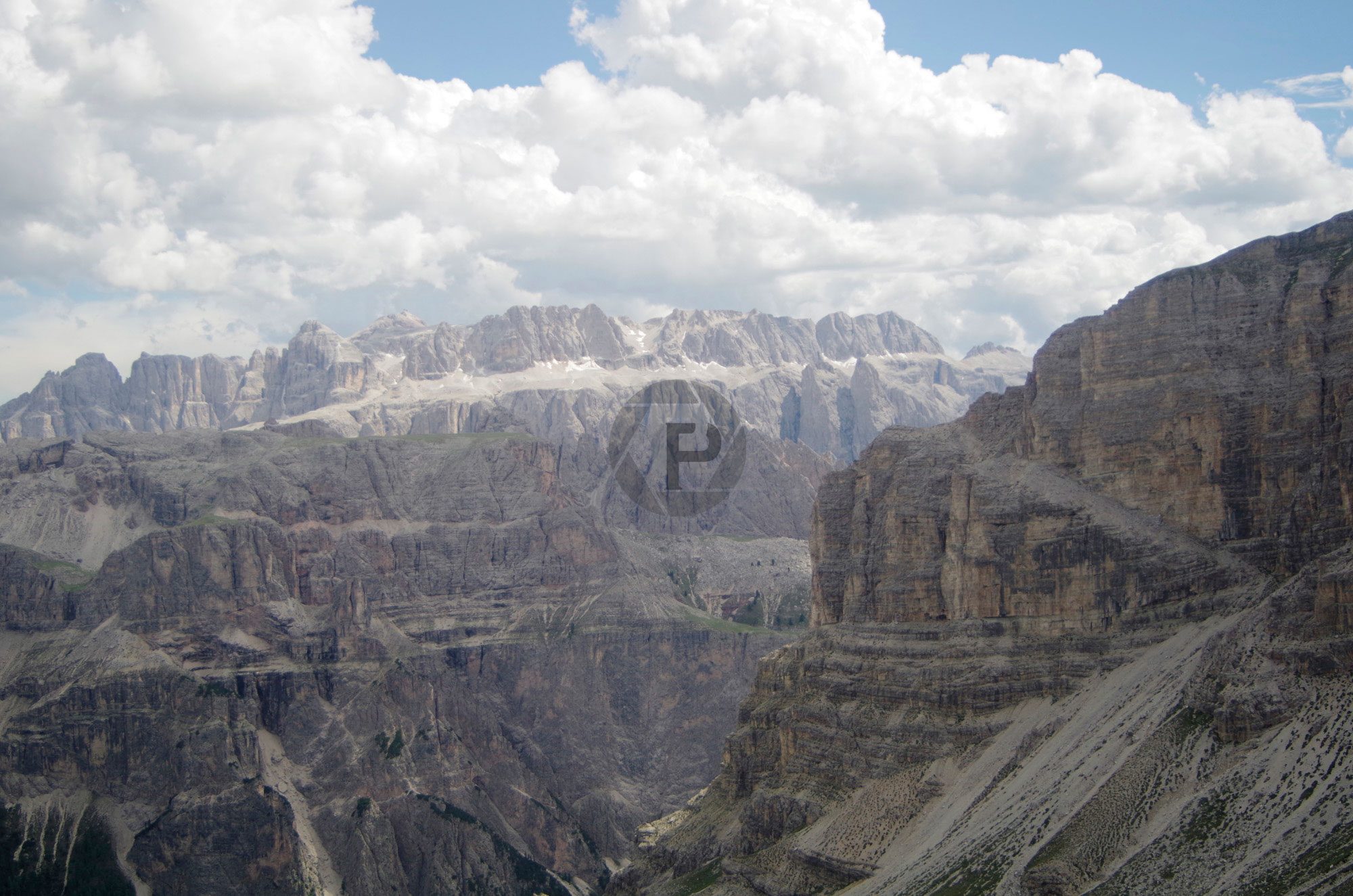